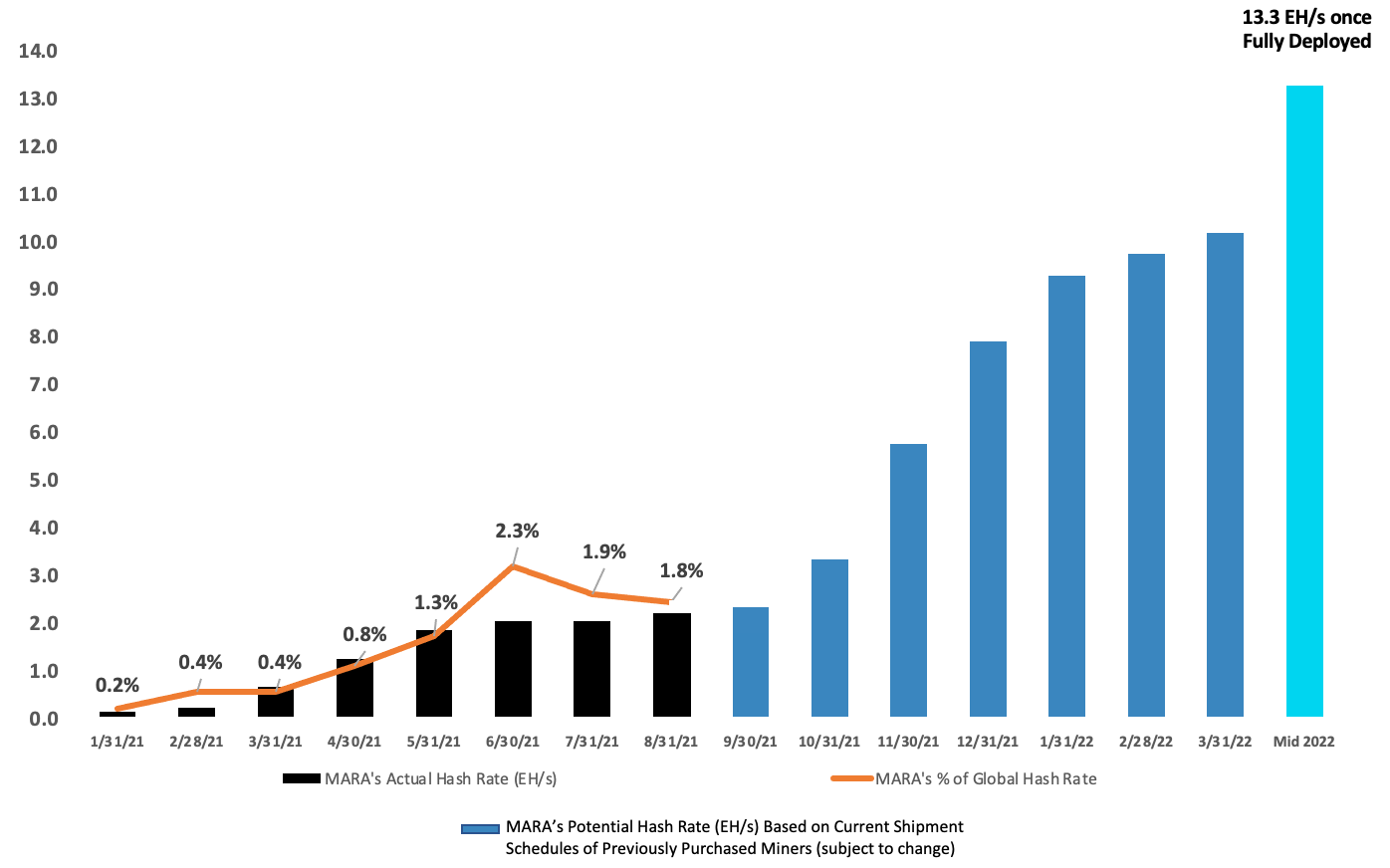 Corporate Highlights as of September 1, 2021

Bitcoin Production Update
As of September 1, 2021, Marathon’s mining fleet has produced approximately 1,757.9 newly minted bitcoins during 2021. By month, the Company’s bitcoin production was as follows:

Management Commentary
“During August, the total network’s hash rate increased more than 15%, and during that same time, we increased our bitcoin production by 6% month-over-month to 469.6 BTC,” said Fred Thiel, Marathon’s CEO. “Despite a minor technical issue at the Hardin power plant, which caused our miners to be offline for approximately two days during the month and which has since been remediated, we still averaged 15.1 BTC per day and increased our total bitcoin holdings to approximately 6,695 BTC. We also made substantial progress with our hosting partner, Compute North, preparing new locations to receive the large number of previously purchased miners we expect to ship from Bitmain over the coming months. We continue to expect shipments as scheduled, but we understand that there is the potential for global logistics issues to impact these schedules. Based on the most up-to-date information, we believe we remain well positioned to scale our hash rate from its current level of 2.3 EH/s to 13.3 EH/s by mid next year.”

Investor Notice
Investing in our securities involves a high degree of risk. Before making an investment decision, you should carefully consider the risks, uncertainties and forward-looking statements described under "Risk Factors" in Item 1A of our most recent Annual Report on Form 10-K for the fiscal year ended December 31, 2020. If any of these risks were to occur, our business, financial condition or results of operations would likely suffer. In that event, the value of our securities could decline, and you could lose part or all of your investment. The risks and uncertainties we describe are not the only ones facing us. Additional risks not presently known to us or that we currently deem immaterial may also impair our business operations. In addition, our past financial performance may not be a reliable indicator of future performance, and historical trends should not be used to anticipate results in the future. Future changes in the network-wide mining difficulty rate or Bitcoin hash rate may also materially affect the future performance of Marathon's production of Bitcoin. Additionally, all discussions of financial metrics assume mining difficulty rates as of September 2021. The total network’s hash rate data is calculated from a third-party source, which is available here: https://www.blockchain.com/charts/hash-rate. Data from third-party sources has not been independently verified. See "Safe Harbor" below. 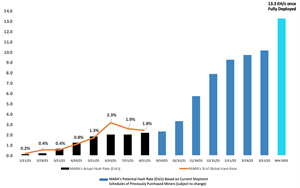