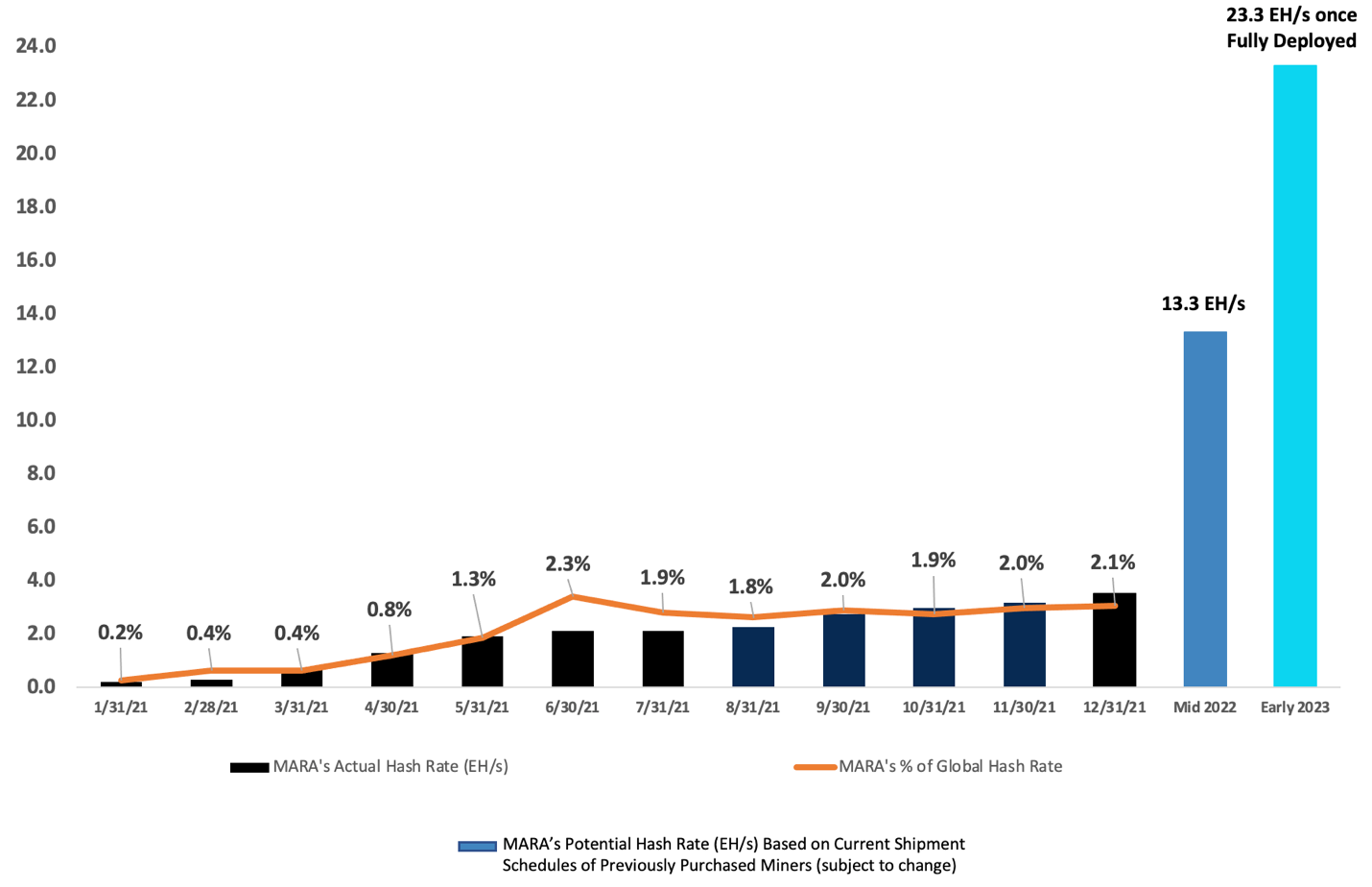 Corporate Highlights as of January 1, 2022

Miner Installations and Hash Rate Growth
During fiscal year 2021, Marathon successfully deployed 30,391 top-tier bitcoin miners and completed the construction of its mining facility in Hardin, MT. As a result, the Company increased its hash rate by 1,790% from 0.2 EH/s in January 2021 to 3.5 EH/s in December 2021.

On December 23, 2021, Marathon announced that it had entered into a contract with BITMAIN to purchase a record number of ANTMINER S19 XP (140 TH/s) bitcoin miners, all of which are currently expected to ship from BITMAIN between July 2022 and December 2022. Marathon currently expects all of its purchased miners to be deployed by early 2023, at which point, the Company’s mining operations are expected to consist of approximately 199,000 bitcoin miners, producing approximately 23.3 EH/s, making Marathon one of the largest known publicly traded bitcoin miners in the world.

Management Commentary
“2021 was a transformative year for Marathon as we increased our hash rate 1,790% and increased our bitcoin production 846% year-over-year to 3,197 self-mined BTC,” said Fred Thiel, Marathon’s CEO. “We finished the year with our most productive month to date, producing 484.5 bitcoin in December and 1,098 bitcoin in the fourth quarter. We expanded our agreement with Compute North and secured access to reliable hosting and renewable power behind the meter at industry low rates for over 100,000 of our previously purchased miners. And more recently, we placed a record order for BITMAIN’S newest machines, the S19 XP. As a result, we have increased our projected hash rate by 75% from our prior projection of 13.3 EH/s by the middle of 2022 to 23.3 EH/s by early 2023.

“We are starting 2022 with substantial momentum and a clear path to grow throughout this year and beyond. Today, we have access to top-tier hosting and renewable power, a strong balance sheet with $644.3 million in total liquidity, and nearly 167,000 industry leading bitcoin miners being added to our fleet between the start of this year and early 2023. We are currently installing machines at Compute North’s existing facilities and testing deployments at new locations. With construction progressing over the coming months, we expect to see these deployments accelerate as we move to full production. We are optimistic that 2022 will be another great year for our business, and we look forward to growing Marathon into one of the leading bitcoin miners in North America and potentially the largest known miner in the world over the coming quarters.”

Investor Notice
Investing in our securities involves a high degree of risk. Before making an investment decision, you should carefully consider the risks, uncertainties and forward-looking statements described under "Risk Factors" in Item 1A of our most recent Annual Report on Form 10-K for the fiscal year ended December 31, 2020. If any of these risks were to occur, our business, financial condition or results of operations would likely suffer. In that event, the value of our securities could decline, and you could lose part or all of your investment. The risks and uncertainties we describe are not the only ones facing us. Additional risks not presently known to us or that we currently deem immaterial may also impair our business operations. In addition, our past financial performance may not be a reliable indicator of future performance, and historical trends should not be used to anticipate results in the future. Future changes in the network-wide mining difficulty rate or Bitcoin hash rate may also materially affect the future performance of Marathon's production of Bitcoin. Additionally, all discussions of financial metrics assume mining difficulty rates as of January 2021. The total network’s hash rate data is calculated from a third-party source, which is available here: https://www.blockchain.com/charts/hash-rate. Data from third-party sources has not been independently verified. See "Safe Harbor" below.

Photos accompanying this announcement are available at 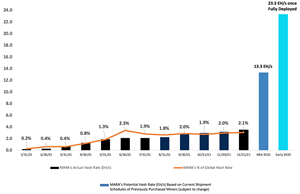