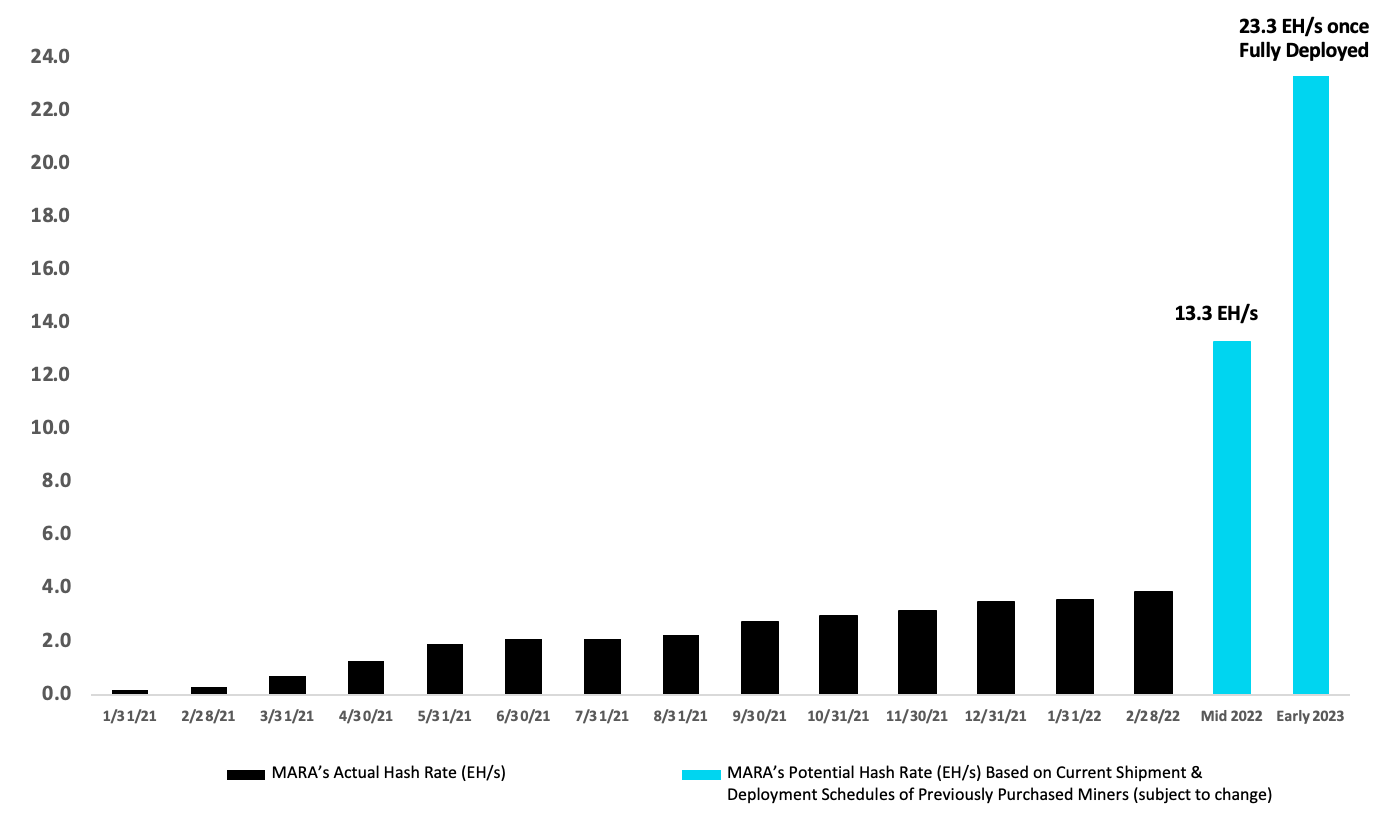 Corporate Highlights as of March 1, 2022

Miner Installations and Hash Rate Growth
In February 2022, Marathon and Compute North received permission to begin energizing miners at new locations. As a result, the Company increased its hash rate 8% from the prior month as approximately 2,800 miners were brought online. As of March 1, 2022, Marathon has successfully deployed 35,510 miners, and the Company’s hash rate was approximately 3.8 EH/s. Now that Marathon has broken the mold on deploying behind the meter at scale, deployments have begun in earnest, and the Company expects deployments to continue accelerating throughout the rest of 2022.

Construction of Compute North’s new facilities, which are predominantly “behind the meter” at wind and solar farms, remain underway. These facilities are at multiple locations and include a 280-megawatt (MW) site in west Texas. Marathon continues to expect all of its purchased miners to be deployed by early 2023, at which point, the Company’s mining operations are expected to consist of approximately 199,000 bitcoin miners, producing approximately 23.3 EH/s. Additionally the Company continues to expect its mining operations to be 100% carbon neutral by the end of 2022.

Management Commentary
“In February, Compute North received permission to begin bringing miners online at new locations, and as a result, we increased our hash rate 8% month-over-month after successfully energizing 2,800 miners,” said Fred Thiel, Marathon’s CEO. “We produced 360 bitcoin in February, which is a 729% increase year-over-year. Relative to the prior months of January and December, our February production was impacted by increasing network difficulty, continued fluctuations at the power station in Montana, and voluntary curtailment of our miners in Texas to support the grid during a recent storm. We expect our monthly production reliability to improve as we diversify deployments across new locations.

“Deploying behind the meter at scale is a method that required additional permitting and coordination from the various parties involved. Now that we have broken the mold on this process, we expect deployments at new facilities to continue to accelerate into the second quarter and throughout the rest of the year. Our primary objectives for 2022 are to effectively deploy our miners, achieve our growth targets, and continue expanding our competitive moat, and we believe we are well positioned to achieve each of those goals. We look forward to supporting the adoption, security, and evolution of Bitcoin by growing our mining operations to 23.3 EH/s and achieving 100% carbon neutrality over the coming quarters.”

Investor Notice
Investing in our securities involves a high degree of risk. Before making an investment decision, you should carefully consider the risks, uncertainties and forward-looking statements described under "Risk Factors" in Item 1A of our most recent Annual Report on Form 10-K for the fiscal year ended December 31, 2020. If any of these risks were to occur, our business, financial condition or results of operations would likely suffer. In that event, the value of our securities could decline, and you could lose part or all of your investment. The risks and uncertainties we describe are not the only ones facing us. Additional risks not presently known to us or that we currently deem immaterial may also impair our business operations. In addition, our past financial performance may not be a reliable indicator of future performance, and historical trends should not be used to anticipate results in the future. Future changes in the network-wide mining difficulty rate or Bitcoin hash rate may also materially affect the future performance of Marathon's production of Bitcoin. Additionally, all discussions of financial metrics assume mining difficulty rates as of March 2022. The total network’s hash rate data is calculated from a third-party source, which is available here: https://www.blockchain.com/charts/hash-rate. Data from third-party sources has not been independently verified. See "Safe Harbor" below. 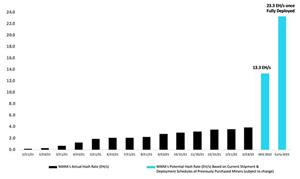