- Company Produces a Record 1,259 BTC in Q1 2022, up 556% Year-Over-Year from Q1 2021 and up 15% Sequentially from Q4 2021
- Total Bitcoin Holdings Increase to 9,374 BTC
- Hash Rate Increased 14% from the Prior Quarter with Deployments Expected To Ramp in the Coming Weeks as Permitting and Approval Process is Finalized 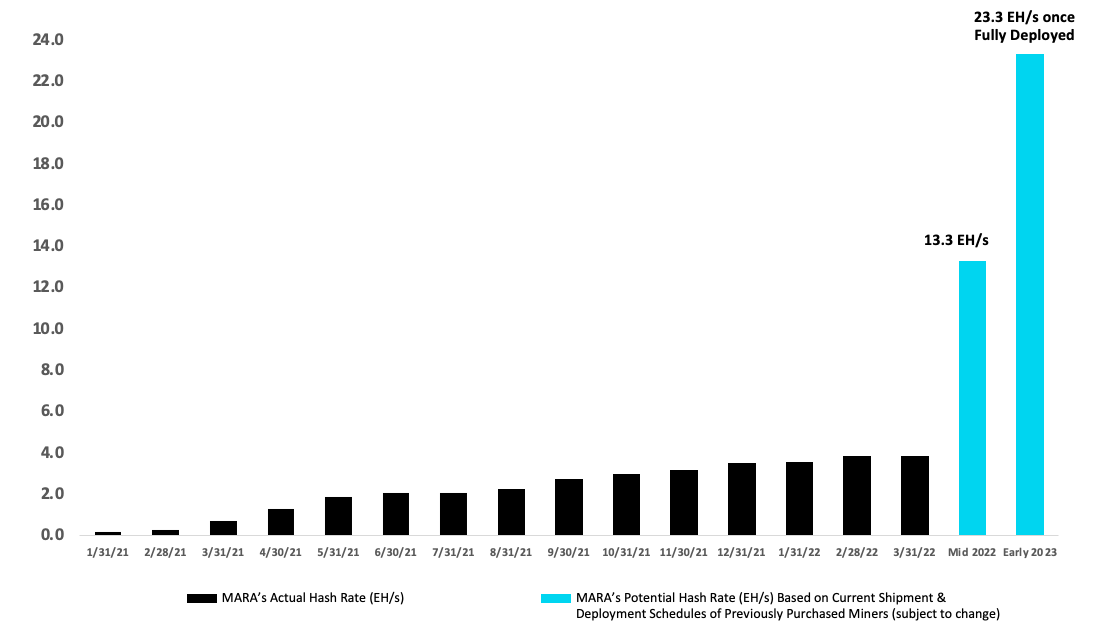 Corporate Highlights as of April 1, 2022

Bitcoin Production Update
Year-to-date, Marathon’s mining fleet has produced 1,258.6 bitcoin, a 556% increase over the same time period in the prior year. By month, the Company’s bitcoin production was as follows:

Miner Installations and Hash Rate Growth
Marathon’s current strategy is to deploy its miners predominantly behind the meter at sustainable, non-carbon emitting power stations. In an effort to maximize the uptime of the Company’s miners, a grid connection is being established at these locations for when the renewable power stations operate intermittently. Establishing this grid connection is a new process that required additional coordination and permitting from the various parties, including the grid operator. This extended approval process caused the deployments of Marathon’s miners to be delayed by approximately 45 days during the first quarter of 2022. However, in March, the Company received word that full approval had been received and that initial energization is expected in the coming weeks.

Currently, deployments of containers are ongoing at an accelerated rate at Compute North’s new facilities in Texas. These facilities are at multiple locations and include a 280-megawatt (MW) site in west Texas. Despite slight changes to the early deployment schedule, Marathon continues to expect all of its purchased miners to be deployed by early 2023, at which point, the Company’s mining operations are expected to consist of approximately 199,000 bitcoin miners, producing approximately 23.3 EH/s. Additionally the Company continues to expect its mining operations to be 100% carbon neutral by the end of 2022.

Management Commentary
“In the first quarter of 2022, we increased our bitcoin production 15% from the prior quarter and produced a record 1,259 bitcoin even as the global hash rate rose by approximately 17%,” said Fred Thiel, Marathon’s CEO. “Our bitcoin production would have increased 17% to 1,282 BTC if the global hash rate had remained constant from the end of Q4 2021. We continue to hold, or HODL, all of our bitcoin, and as a result, we now hold 9,374 bitcoin, strengthening our standing as one of the largest holders of bitcoin among publicly traded companies.

“At Marathon, we are constantly pushing the boundaries to propel our business and our industry forward. Not every industry operates at the same pace as we do, and sometimes innovative solutions can take time to implement. Deploying behind the meter at renewable power facilities has many benefits to our business, to the grid, and to the local community, but this pioneering approach comes with unique challenges that we have had to overcome: most notably, feeding power from the grid back into a power station at large scale.

“Typically, power flows from power stations into the grid. However, to ensure we have a consistent power supply when the renewable sources are operating intermittently, we also needed power to flow from the grid back into the power station at scale. This is a new process, and it look longer than originally anticipated for the various parties involved to coordinate and complete the permitting and approval process. As a result, the major ramp in our deployments did shift by approximately 45 days during the first quarter.

“Encouragingly, in March, we received word that the our hosting provider and the power companies received permission to move forward with our full deployments in earnest. As a result, we believe these delays are now behind us. Currently, deployments of containers are ongoing at an accelerated rate. Barring any other regulatory hurdles or unforeseen events, we expect to see new miners energized in the coming weeks and for this process to accelerate throughout the rest of the year. Despite the changes to our schedule, based on what we know today, we still believe we are on track to reach 23.3 EH/s by early next year.

“Our primary focus at Marathon remains on deploying our miners. Given our record first quarter, our ability to work alongside our partners to overcome obstacles, and the positive news we recently received regarding deployments, we remain confident in our ability to continue to execute on our strategy of scaling Marathon into one of the largest, most agile, and most sustainably operated Bitcoin miners in North America.”

Investor Notice
Investing in our securities involves a high degree of risk. Before making an investment decision, you should carefully consider the risks, uncertainties and forward-looking statements described under "Risk Factors" in Item 1A of our most recent Annual Report on Form 10-K for the fiscal year ended December 31, 2021. If any of these risks were to occur, our business, financial condition or results of operations would likely suffer. In that event, the value of our securities could decline, and you could lose part or all of your investment. The risks and uncertainties we describe are not the only ones facing us. Additional risks not presently known to us or that we currently deem immaterial may also impair our business operations. In addition, our past financial performance may not be a reliable indicator of future performance, and historical trends should not be used to anticipate results in the future. Future changes in the network-wide mining difficulty rate or Bitcoin hash rate may also materially affect the future performance of Marathon's production of Bitcoin. Additionally, all discussions of financial metrics assume mining difficulty rates as of March 2022. The total network’s hash rate data is calculated from a third-party source, which is available here: https://www.blockchain.com/charts/hash-rate. Data from third-party sources has not been independently verified. See "Safe Harbor" below. 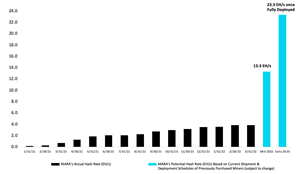