Total Bitcoin Holdings Increase to 9,673 BTC as Thousands of Bitcoin Miners Are Successfully Installed in Containers at Texas Facility and Prepared for Energization 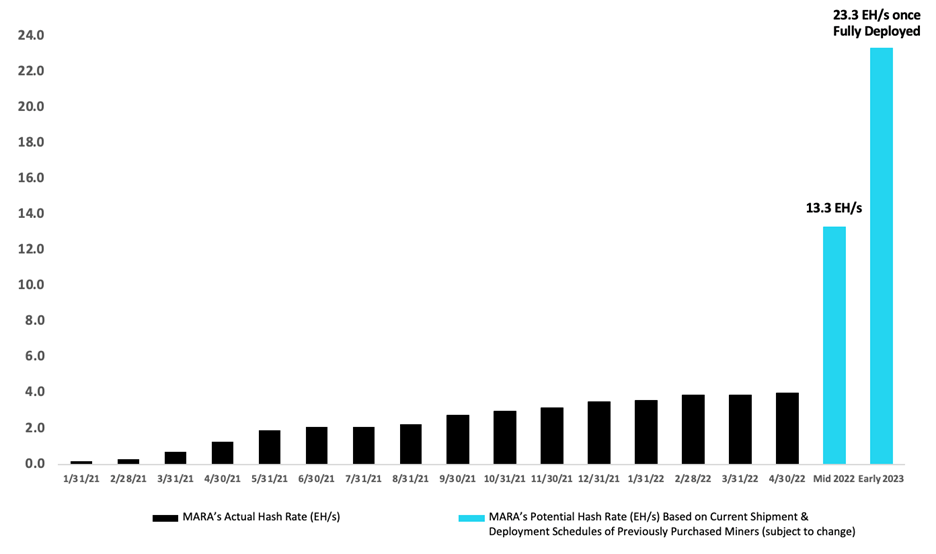 Bitcoin Production Update
Year-to-date, Marathon’s mining fleet has produced 1,558 bitcoin, a 340% increase over the same time period in the prior year. By month, the Company’s bitcoin production was as follows:

Miner Installations and Hash Rate Growth
In April, weather and maintenance issues caused the power generating station in Hardin, MT to operate below normal levels, reducing Marathon’s potential bitcoin production by approximately 30% during the month. As disclosed on April 5, Marathon intends to relocate its miners from Hardin to more sustainable sources of power in stages during the third quarter of 2022.

During April, approximately 4,200 of Marathon’s miners were successfully installed, pending energization, in containers at one of Compute North’s new facilities in Texas. These miners were originally scheduled to be energized on April 17, increasing Marathon’s hash rate by approximately 0.4 EH/s, or 11%, from the prior month. Due to the Company’s energy provider requiring additional consent from a third-party, the energization of Marathon’s miners was rescheduled to the month of May. Currently, the Company does not expect this process to impact future deployments of miners.

As the Company’s power provider finalizes the energization process, construction of Compute North’s first major facility in Texas has continued at pace and thousands of additional miners are being installed and prepared for energization. Given the current construction and deployment schedule, Marathon continues to expect all 199,000 miners, producing approximately 23.3 EH/s, to be deployed by early 2023. Additionally, the Company continues to expect its mining operations to be 100% carbon neutral by the end of 2022.

Management Commentary
“In April, we grew our bitcoin holdings to 9,673 BTC as we successfully installed nearly 4,200 miners in containers and made substantial progress addressing some of the regulatory and permitting challenges related to breaking the mold on deploying behind the meter,” said Fred Thiel, Marathon’s chairman and CEO. “Ongoing maintenance issues at the power generating station in Montana caused our bitcoin production to dip by approximately 30% in April. As we announced in April, we will be transitioning our miners out of Hardin in stages to minimize downtime and moving them to more sustainable sources of power during the third quarter.

“In April, approximately 4,200 miners were successfully installed in containers at one of Compute North’s new facilities in Texas. These miners were originally scheduled to be energized on April 17, which would have increased our hash rate by approximately 11% during the month. However, we encountered some friction in April as our energy partner required the additional consent of a third-party to energize our installed miners. Encouragingly, we expect this matter to be resolved early this month, and we do not anticipate it impacting future deployments.

“While the power provider was working through this process, construction of Compute North’s facilities continued unimpaired and thousands of additional miners are currently being installed and prepared for energization. Based on what we know today about the pace of construction and deployment, we believe we may be through our backlog of miners and fully back on track with deployments before the end of this year. Given the progress we have made at the start of this year breaking the mold on deploying behind the meter and the unique advantages we maintain from our asset light model, we are cautiously optimistic that we are still on pace to achieve 23.3 exahash early next year.”

First Quarter 2022 Earnings Webcast and Conference Call
Marathon Digital Holdings will hold a webcast and conference call today at 4:30 p.m. Eastern time to discuss its financial results for the quarter ended March 31, 2022, which will be published in a press release prior to the call. To register to participate in the conference call, or to listen to the live audio webcast, please use this link. The webcast will also be broadcast live and available for replay via the investor relations section of the Company’s website at ir.marathondh.com.

If you have any difficulty connecting with the conference call, please contact Marathon’s investor relations team at ir@marathondh.com.

Investor Notice
Investing in our securities involves a high degree of risk. Before making an investment decision, you should carefully consider the risks, uncertainties and forward-looking statements described under "Risk Factors" in Item 1A of our most recent Annual Report on Form 10-K for the fiscal year ended December 31, 2021, filed with the SEC on March 10, 2022. If any of these risks were to occur, our business, financial condition or results of operations would likely suffer. In that event, the value of our securities could decline, and you could lose part or all of your investment. The risks and uncertainties we describe are not the only ones facing us. Additional risks not presently known to us or that we currently deem immaterial may also impair our business operations. In addition, our past financial performance may not be a reliable indicator of future performance, and historical trends should not be used to anticipate results in the future. Future changes in the network-wide mining difficulty rate or Bitcoin hash rate may also materially affect the future performance of Marathon's production of bitcoin. Additionally, all discussions of financial metrics assume mining difficulty rates as of May 2, 2022. The total network’s hash rate data is calculated from a third-party source, which is available here: https://www.blockchain.com/charts/hash-rate. Data from third-party sources has not been independently verified. See "Forward-Looking Statements" below.

About Marathon Digital Holdings
Marathon is a digital asset technology company that mines bitcoin with a focus on the blockchain ecosystem and the generation of digital assets.

Photos accompanying this announcement are available at: 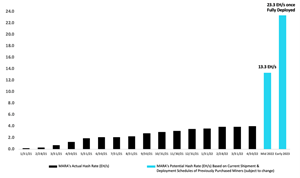