Management Commentary
“In 2022, we made significant progress in increasing our hash rate while also transitioning to more sustainable power sources,” said Fred Thiel, Marathon’s Chairman and CEO. “Despite challenges earlier in the year, we doubled our hash rate to 7.0 exahashes per second year-over-year, with a majority of it now located at the King Mountain wind farm in West Texas. We finished the year with one of our most productive quarters to date, producing 1,562 bitcoin in the fourth quarter.

“In December, we expanded our agreement with Applied Digital to deploy roughly 12,000 S19 XPs, which are approximately 30% more energy efficient than the prior generation of servers, at their Jamestown facility in North Dakota. This site is already constructed and operational, and our expectation is for miners to come online within the next month. In Garden City, installations of miners remain underway, as we now have roughly 2.1 exahashses installed and pending energization.

“We also took proactive measures to strengthen our liquidity position and enhance the performance of our mining fleet. Given the macroeconomic uncertainty heading into 2023, we decided to fully pay down outstanding balances under our revolving credit agreement. This freed up bitcoin that was previously held as collateral, increasing our unrestricted bitcoin holdings from 4,200 BTC as of November 30 to 7,815 BTC (approximately $129.3 million) as of December 31. We finished the year with $103.7 million in cash on hand.

“During December, we tested overclocking and underclocking servers and began researching dual-phase immersion cooling systems. We also continued working with the new operator of the King Mountain site on improving operations and the curtailment strategy to optimize production. These efforts position us to develop our competitive advantages further and become a more efficient and resilient business as we continue to grow.

“As we enter 2023, we remain confident in our ability to scale Marathon into one of the largest and most energy efficient Bitcoin mining operations globally. We have thousands of miners ready to be energized over the coming months, which we expect to more than triple our current production capacity to approximately 23 exahashes by mid-year.”

Technology Update
In November, Marathon began an immersion-cooled pilot project, which involves submerging Bitcoin mining servers in a dielectric fluid to determine if the Company can improve the efficiency and/or performance of its operations. In December, Marathon’s team successfully increased the hash rate of an S19 J Pro by 20% while reducing its power draw on a per terahash basis by approximately 4%. The Company also increased the hash rate of an S19 XP by 20%, marginally increasing the number of joules per terahash from 21.5 to 23.7 joules per terahash.

While it remains to be seen if such improvements in performance can be consistently replicated and implemented at scale, the Company is encouraged by these preliminary results and their ability to potentially increase Marathon’s competitive advantages.

Miner Energization and Installations Updates
According to the latest information made publicly available, construction of facilities and installation of miners at Applied Digital’s data center sites remain underway as Applied Digital awaits regulatory approval to energize its newest facilities.

In December, Marathon secured an additional 33 megawatts of hosting capacity with Applied Digital at its Jamestown, North Dakota facility. As a result of this new arrangement the Company expects to deploy approximately 12,000 S19 XPs in the coming month as this site is fully constructed and has the necessary requirements for energization.

As of December 31, Marathon’s operating fleet consists of approximately 69,000 bitcoin servers, theoretically capable of producing approximately 7.0 EH/s when operating at full capacity. An additional 2.1 EH/s is currently pending energization after an additional 1,000 S19 XPs were successfully installed in Texas during the month of December.

Once all of Marathon’s previously purchased miners are installed, approximately 66% of the Company’s hash rate is expected to be generated by S19 XPs, which are approximately 30% more energy efficient that the prior generation of mining servers. The Company still expects to have approximately 23 EH/s of capacity installed near the middle of 2023. 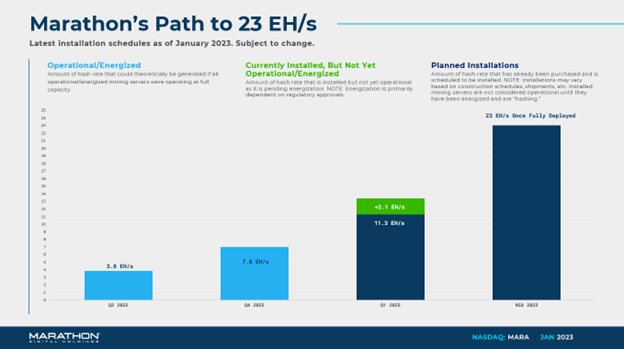 Investor Notice
Investing in our securities involves a high degree of risk. Before making an investment decision, you should carefully consider the risks, uncertainties and forward-looking statements described under "Risk Factors" in Item 1A of our most recent Annual Report on Form 10-K for the fiscal year ended December 31, 2021, filed with the SEC on March 10, 2022. If any of these risks were to occur, our business, financial condition or results of operations would likely suffer. In that event, the value of our securities could decline, and you could lose part or all of your investment. The risks and uncertainties we describe are not the only ones facing us. Additional risks not presently known to us or that we currently deem immaterial may also impair our business operations. In addition, our past financial performance may not be a reliable indicator of future performance, and historical trends should not be used to anticipate results in the future. Future changes in the network-wide mining difficulty rate or Bitcoin hash rate may also materially affect the future performance of Marathon's production of bitcoin. Additionally, all discussions of financial metrics assume mining difficulty rates as of December 2022. See "Forward-Looking Statements" below.

About Marathon Digital Holdings
Marathon is a digital asset technology company that focuses on supporting and securing the Bitcoin ecosystem. The Company is currently in the process of becoming one of the largest and most sustainably powered Bitcoin mining operations in North America, while remaining asset light. 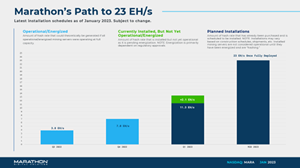 Latest installation schedules as of January 2023. Subject to change.